Like any other civilization we hear about will ours be gone at one time. But it could possibly also continue for many generations and destroy most of the earthlife as we know it. It will remain our responsibility to help speed up the demise of our rotten civilization, which is based upon death and destruction to an extent never known before.

Against the dominant Culture of Death and Destruction

During the preceding years we heard a lot of talk about climate change, melting ice masses, rising sea levels, extended droughts and desertification, pollution and waste, loss of lifeforms, and such things. ...

On Land and Development

What kind of development? Who controls the use of land and water? What are conditions to achieve self-determination?

For the most part, this text is a kind of inventory, motivated largely by want to know what is going on and accepting responsibility for my decisions and the consequences they have.

The colonizer societies never made an effort to decolonize themselves, but instead moved to extend and deepen colonial relations. 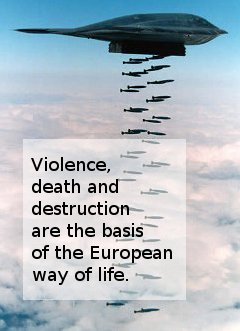